The Reverend Arthur Vall-Spinosa, Rector of St. Thomas Church, founded the school as an alternative to the public school system, which was becoming overburdened with an influx of baby-boomer children in the rapidly growing eastside community.

Established as an Independent School 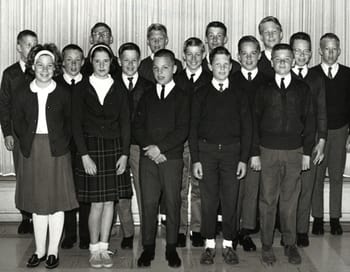 In 1954 it became apparent that the portable building housing the School could no longer meet the needs of students, and construction began on the School’s present site. The School flourished under Father Vall-Spinosa’s guidance, and when he left the parish in 1967 St. Thomas Episcopal Church decided the School should be a separate entity from the Church. On August 13, 1968, the School’s Board of Trustees was formed and STS incorporated. The new Trustees felt strongly that the reorganized School should maintain a mutually beneficial relationship with St. Thomas Church. Although fully independent, the School leases its current property from St. Thomas Church and both institutions continue to work together in a spirit of cooperation. Genevieve McCracken, who taught at STS since 1953, became Headmistress of the newly incorporated School.

In August 1970, Ronald L. Smallman became Headmaster and STS adopted a dress code/uniform policy for all students. Over the years, the curriculum expanded to include new subject areas and the facilities to house them. The School began its foreign language program – originally French, then Latin, and now Spanish. A physical education program and gym were added. A new library was built and library resources acquired. New facilities were added to accommodate the expanding preschool program. 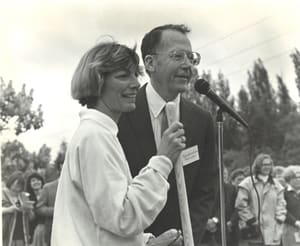 In 1990, the school embarked on a major building program that not only doubled the size of the school’s physical plant but also refurbished and upgraded the existing facility. The new building included expanded administrative offices, a health room, an art/science room, a technology center, two new beginning school classrooms, a library/media resource center, and teacher staff rooms. The music house was also created. STS established the Extended Day program to provide supervision and activities for students before and after school.

Ronald L. Smallman retired as Headmaster in 1992 after twenty-one years of service to STS. At that time, Joan Beauregard, who had previously been the 6th Grade teacher and the Associate Head of School, succeeded him as Head of School.

A Supportive and Generous Community

The 1990s also brought the foundation of the School’s endowment funds. In 1992, the School’s first endowment, The Ronald L. Smallman Endowment for Financial Aid was established; its revenues support the School’s financial aid program. In 1994, The Faculty Enrichment Endowment was founded, and its rapid growth, supporting professional development for teachers and administrators, speaks to the support that the community willingly gives to its professional staff. Subsequent years have seen the establishment of The John Fluke, Sr. Endowment for Science and Reading (1995), The Humanities Endowment (1996), The Library/Media Resources Endowment (1997), and The Knoblauch Endowment for Theatre Arts (1999). Most recently, through a matching gift to the Annual Dinner Auction, The Faculty Compensation Endowment was established in 2003, with the stated goal “to achieve and sustain levels of compensation…that are competitive with the best schools in the nation for the faculty, administration, and staff of St. Thomas School.”

A Leader of 21st Century Education 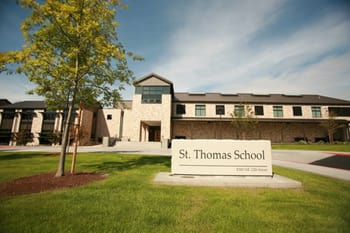 In July of 2005, Dr. Kirk Wheeler succeeded Joan Beauregard as Head of School. Under his leadership, the School established a strategic vision and continued to place an emphasis on excellence in education. Having passed the half-century mark, St. Thomas School embraced its tradition of growth and development by preparing itself for a dynamic future. Plans were laid for a new campus, and the community bid farewell to the old buildings in June 2007. In May 2007, the School’s first major capital campaign was launched to provide funding for the new campus and to establish funding for other critical initiatives including financial aid grants, professional development, and academic programs. 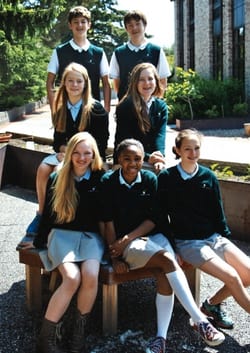 In August 2008, after being temporarily located at the Linbrook Office park for one year, STS moved back to its home in Medina to occupy a brand new, state-of-the-art 55,000 sq. ft. building designed by Bassetti Architects. The building, certified LEED® Gold for Schools, provides a state of the art learning environment for students.

In 2009-10 the Board of Trustees voted to add Seventh and Eighth Grades and planning began in earnest. In order to provide a unique learning experience for Middle Schoolers, the facility was redesigned to include a new media center, student store, and ample space for students to meet and work on collaborative projects. In June 2014, STS graduated its first class of Eighth Graders, a group of young men and women who are very well prepared for their high school adventures.