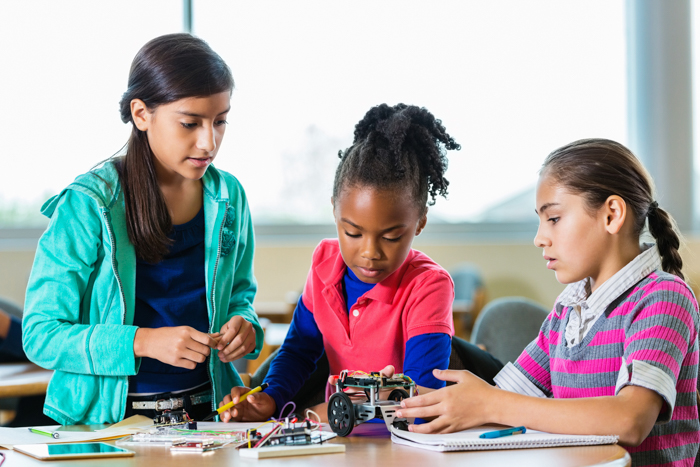 I recently read a thoughtful piece in NPR highlighting findings from a study on school structure and bullying from the American Education Research Association that was published in September. While it's clear that school structure, culture and academics are intertwined when it comes to a student's success and sense of belonging, the study sheds light as to why.

According to the study, middle schoolers report higher rates of bullying than students in any other grade span – and school structure impacts rates of bullying and students' self-reported sense of community. It's important to note that bullying is a defined behavior characterized by real or perceived power differentials. It's not to be confused with students disagreeing and flexing their social muscles in a developmentally appropriate way.

The researchers looked at K-8 schools and 6-12 schools to unearth if middle schoolers' position in a school affected the number of bullying incidents and their sense of safety and community. The research was conducted across 90,000 students and more than 500 schools over a three-year-period, and the results are compelling.

According to NPR journalist Anya Kamenetz, who covered the study, "Since middle schoolers generally have a harder time with school climate than high schoolers do, there's a case to be made for reserving 'bottom dog' status for ninth-graders alone."

I would argue that the social-emotional benefits of a preschool-8 or K-8 school structure extend far beyond fewer incidents of bullying. At STS, middle schoolers are given leadership roles and are expected to exemplify the school's culture for younger students. This empowers middle schoolers at a time that can be socially and emotionally challenging.

When middle schoolers are instilled with a sense of trust and leadership, something profound happens. They are more conscious of their behavior and they rise to the occasion, setting an example for younger students. This type of leadership and empowerment is more difficult to achieve in a middle school-only setting, and particularly in a 6-12 setting.

As parents of middle schoolers are well aware, the tween years are defined by boundary testing. Middle schoolers are grappling with their own development and identities, and switching schools from an elementary school to a 6-12 environment can be especially challenging. Continuity, both socially and academically, fosters students' sense of safety and community during the tween years.

In addition to the tangible social-emotional benefits of a preschool-8 school structure, students reap myriad academic benefits. Through a buddy program, older students at STS have a direct role in teaching younger students. By articulating their knowledge and presenting it in a manner that's approachable for younger learners, middle schoolers solidify and reinforce their own knowledge and skillsets.

According to Stanford psychologist Robert Zajonc, tutoring tends to benefit the older child as much – if not more—than the younger child. Quoted in a New York Times article, Zajonc said, "The younger one is asking questions, and challenging meanings and explanations, and that will contribute to the intellectual maturity of the older one."

Eighth graders also lead their own "senior" conferences, articulating their (sometimes 12-year) academic journeys, and what they have learned about themselves socially and academically. In a pre-school-8 environment, the entire journey is intentional and coherent, with no redundancies and no gaps, well-equipping students for academic rigor and athletics in any high school.

While school structure is indeed important, particularly for students during the middle school years, school culture is especially critical as we help students progress on their social-emotional and academic journeys.

School culture sets the expectation for academic achievement and a shared responsibility to one another. It also helps buffer our community from typical bullying because there's an inherent sense that we all need to take care of each other.

At STS, through Leadership Lab, buddy programs and Edgework, we promote the joy of learning and the core values that help shape our students' character. By creating a community of learning, we aim to foster a culture of high expectations and kindness at every age.